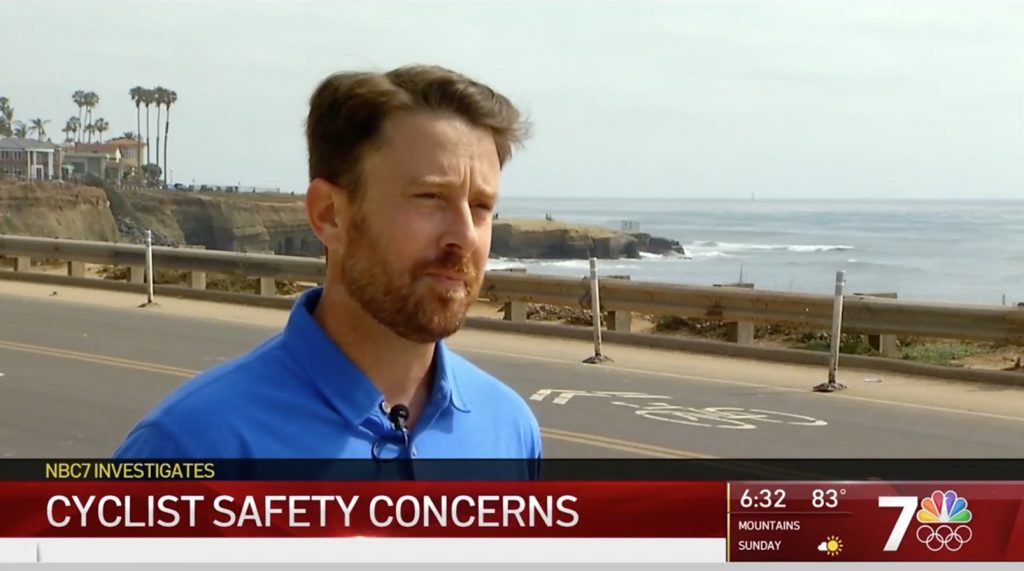 San Diego's Big Biking Problem
Adam was recently quoted in a news piece on bike safety reported by NBC San Diego journalist Alexis Rivas. The story highlights the dangerous biking conditions in San Diego which have resulted in 14 cyclist deaths in the county this year. Among those killed include postal worker and beloved husband Kevin Wilson, retired physicist Allen Hunter II, architect Laura Shinn, and Salk Institute researcher Swati Tyagi who leaves behind her husband and infant son. These deaths were a tragic loss to our community. Our hearts go out those who lost their lives, and the loved ones they leave behind.

As Mayor Todd Gloria says, "Traveling around our city without a car should not be life-threatening." It is long overdue for San Diego to prioritize safer bikeways. Biking is a fun, climate-safe activity that can be enjoyed by people young and old. Promoting a safe and accessible biking infrastructure will lead to a healthier population, reduce our reliance on cars, and decrease pollution.

A Cyclist's Dream City
In theory, San Diego should be a haven for cycling enthusiasts. Located along the coast of southern California, San Diego County is known for its pleasant, sunny climate and beautiful beaches. There is little rainfall, and the average temperature is 63°F. The moderate temperatures make it perfect for year-round activities such as hiking, biking, and surfing. San Diego has every reason to be one of the most bike-able cities in the world. Unfortunately, that's not the case because our county lacks the biking infrastructure to support a safe cycling community.

What's Wrong With The Biking Infrastructure?
While San Diego boasts over 1,700 miles of bikeways, this is not enough to create a safe biking community. The reality is that this represents a patchwork network of bikeways that are inadequate and incomplete. There are many places where the bike lanes disappear completely, and bicyclists are expected to merge onto busy roadways with cars. This creates dangerous situations that lead to preventable deaths. While mayor Todd Gloria has committed to making San Diego streets safer for cyclists, progress has been slow. Two people were killed this year along Pershing Drive, but it will still be over a year before construction is scheduled to begin on a permanent protected bike lane in this area. How many people have to die before we prioritize safer bikeways? 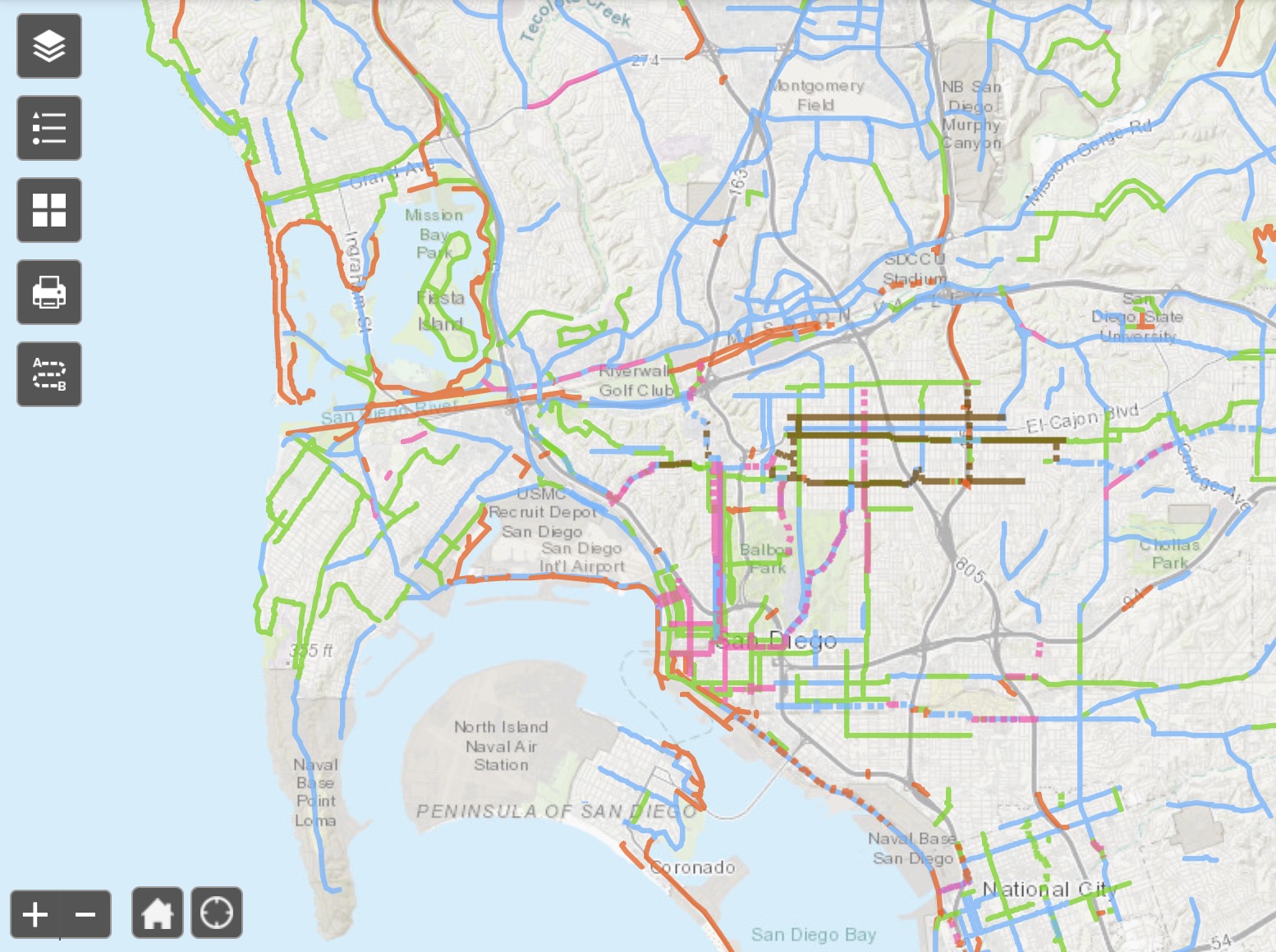 Not All Bikeways Are Created Equal
Just to make it super confusing, there are four types of bicycle facilities identified in the California Highway Design Manual. Bike paths, bike lanes, bike routes, and cycle tracks aka protected bike lanes. As it turns out, the so-called "bike routes" are actually just regular streets where cars and cyclists are expected to share the road. They are marked by painted white bicycles on the roadway. They should not be confused with "bike lanes" which are actual lanes on the side of the road that are defined by a painted stripe.

A "protected bike lane" on the other hand, has a physical barrier which separates cars from bikes. This barrier could be a series of posts, a row of parked cars, a curb, or some other type of physical infrastructure. This is the gold standard of urban bike safety. A number of recent cyclist deaths involved a car that veered into the bike lane and struck the cyclist from behind. Protected bike lanes offer cyclists an added layer of protection and could prevent deaths like these.

In my opinion, neither "bike routes" nor "bike lanes" are adequate or safe options for the average biker. When cyclists and motorists share the road, there is stress for everyone involved. As Adam explains in the video below (go to the 3:15 mark for his segment), he has been aggressively yelled at and accosted by motorists while biking along the popular Sunset Cliffs Coastal Trail. As much as he loves to bike, he no longer feels safe biking around our neighborhood. The bikeways are inadequate and there are too many reckless drivers. As much as I would love to bike around our beautiful city, I won't feel safe until we have a complete and interconnected network of protected bike lanes.

Who Doesn't Want Better Bike Lanes?
Surprisingly, there are people out there who object to improving the biking infrastructure. Motorists, pedestrians, cyclists, and scooters are all competing for limited road space. And you can't forget about parking. The reality is that prioritizing bike lanes means something's got to give, and that could mean narrowing roadways or eliminating parking spots. Business owners worry that losing parking spots will cost them customers. Motorists worry about increased traffic. The solutions are not always clear and simple. No matter what, improving infrastructure will involve some degree of disruption. But instead of focusing on what we might lose, we need to envision what's possible. We have the power to shape a new reality that prioritizes the health of our people and our planet.

So What Can We Do About It?
As Jacob Mandel, advocacy manager at the San Diego County Bicycle Coalition explains, "The death of a cyclist or a pedestrian is not an accident but a policy failure." Like so many other important issues, the actual work of getting things done is a tangled mess of money, politics, priorities, conflicting interests, corruption and greed. But that doesn't mean that we can't create change in our communities. There are two major organizations that are advocating for safer bikeways in San Diego, and you can support these efforts by donating your time, money, and attention.

Bike SD
Another great organization that aims to make San Diego a world-class biking city. Check out their Campaigns to learn more about specific projects they are working on.

Check out the full video and article on bike safety featuring commentary from Adam at the the link below:
Calls for Change Following Rash of Bicyclist Deaths

Hey there. It's been awhile since we updated you o

I have some exciting news to share! This past Apri

Hey it's been a minute since we shared an update!

If you’re looking for a cozy holiday gift this y

Did you know that saunas provide many health benef

We had a soft opening for the house at Gingerhawk

“Between every two pines there is a doorway to a

The house at Gingerhawk is just about complete and

We've been up in Washington State the past few wee

We made it to Gingerhawk! While the house isn’t

Long before we purchased the 25-acre property in C

This guy. 🥰 He’s got the cutest little smile

Take a peak inside the sauna at Gingerhawk, our Wa

In Chinese, hua means flower, and many flowers hav

It’s another Monday in COVID world. Can you beli

Have you seen the latest Gingerhawk construction u

Throwback to baby Hawthorn's first day at the beac

Hey friends - As you may know, a year and a half a